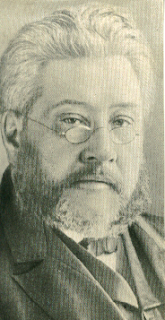 Spurgeon was recognized as a great preacher and teacher well into the 20th century.  Part of the reason was his sound and practical doctrine.
Spurgeon had words to say on preserving the well-known and often used translations of the Bible; the same principles used by the KJV translators who sought to "make a good translation better" by preserving as much as possible the work of earlier translations then familiar to English hearers.
Spurgeon, preaching in 1856, spoke on the great statement of Paul found in the second letter to Timothy:

"...Keep to your faith, I say again, for the Church's sake, for so you will promote strength in the Church. I saw lying between Chatham and Sheerness a number of ships that I supposed to be old hulks; and I thought how stupid Government was to let them remain there, and not chop them up for firewood, or something else; but some one said to me, those ships can soon be fitted for service; they look old now, but they only want a little paint, and when the Admiralty requires them, they will be commissioned and made fit for use. So we have heard some people say, "There are those old doctrines—what good are they?" Wait; there is not a doctrine in God's Bible that has not its use. Those ships that you may think are not wanted, will be useful by-and-bye. So it is with the doctrines of the Bible. Do not say, Break up those old doctrines, you can do without them." Nay, we want them, and we must have them. Some people say, "Why do you preach against Arminians? we have not much to fear from them now." But I like to practice my men against the time comes for action. We are not going to burn our ships; they will be wanted by-and-bye, and when we sail out of harbour, the men will say, "Whence came these old ships?" "Why," we will reply, "they are just the doctrines you thought good for nothing; now we bring them out, and we will make good use of them." Now-a-days we are having new and marvellous hymn-books, full of perfect nonsense; and we are having new theories, and new systems; and they say, "Why be so stringent? our Christian brethren may believe what they like on those points just now;" but as certain as there is a church in this land, they will want our old ships to fight their battles; they may do very well in times of peace, but they will not do in the time of war. They will then need our broadside to support the faith of the gospel, though now they laugh at us. For the strength of the church, my brethren, I bid you "hold fast the form of sound words."

"Well," says one, "I think we ought to hold the truth firmly; but I do not see the necessity for holding the form of it; I think we might cut and trim a little, and then our doctrines would be received better." Suppose, my friends, we should have some valuable egg, and some one should say, "Well, now, the shell is good for nothing; there will never be a bird produced by the shell certainly, why not break the shell? I should simply smile in his face and say, "My dear friend, I want the shell to take care of what is inside. I know the vital principle is the most important, but I want the shell to take care of the vital principle." You say, "Hold fast the principle, but do not be so severe about the form. You are an old Puritan, and want to be too strict in religion; let us just alter a few things, and make it a little palatable." My dear friends, do not break the shell; you are doing far more damage than you think. We willingly admit the form is but little; but when men attack the form, what is their object? They do not hate the form; they hate the substance. Keep the substance then, and keep the form too. Not only hold the same doctrines, but hold them in the same shape—just as angular, rough and rugged as they were, for if you do not, it is difficult to change the form and yet to keep fast the substance. "Hold fast the form of sound words, which thou has heard of me, in faith and love which is in Jesus Christ."

I need hardly comment on what implications Spurgeon's position on this scripture will have for the Authorized or King James Version of the NT.
- Rogue Physicist
Posted by roguephysicist at 10:50 PM 2 comments:

Below is a map showing the known existing foundational churches at the time of the Diocletian Persecution (304 A.D.):
Map adapted from A Short History of the Middle Ages, (U of T press, 2009, 3rd ed.) by Barbara Rosenwein.

Most of the Western Churches were already preaching, teaching and reading the New Testament in Latin by the time of Constantine.  The Greek-speaking churches remained in the Eastern half of the Roman Empire.

Popular Editions or Recensions of the Greek text did take place, according to Jerome, at Alexandria under Hesychius, at Caesarea under Origen, and at Antioch by Lucian.  But Jerome claims to have avoided all those popular local editions, and resorted only to "ancient Greek copies", which can only mean manuscripts at least 60-100 years older than himself (c. 392 A.D.) and hence contemporary with manuscripts perhaps 30 or more years older than Vaticanus and Sinaiticus.

It is possible that Jerome used manuscripts which reflected Origen's or Pamphylus' preferences.  Or his chosen copies might reflect the type of text found in papyrus P45 or P66.  But this is only a side-issue.

From the map, it can be seen just what groups of churches would be under the sway of the various editors and their recensions.   The Alexandrian, Caesarean, and Antiochian areas all lay outside, on the periphery of the main bulk of the church communities spread across the Empire.   Its not surprising that these independent communities had their own texts.

But it is highly implausible that the rest of the Empire would be significantly affected by their textual choices.  The Latins would hardly embrace textual novelties, as the long resistance to Jerome's new Latin Vulgate demonstrates.  In the process of assimilating Jerome's text, the Latins reversed many of his textual decisions, restoring the Latin text back to familiar readings.

The same would be expected from the central Greek Byzantine community, were a text like that of Lucian brought from the outside, i.e., Antioch.  The Byzantines might indeed assimilate some of the readings of a popular preacher like Lucian, or Chrysostom, but any wholesale alterations would meet strong and vocal resistance, and a new text would only be adopted once older accepted and long familiar readings were restored to their traditional places.   Lucian's text would have undergone a restoration process, conforming it to the proto- or early Byzantine text as recognized and venerated by the Greek-speaking Christian world.

This textual inertia would have resisted textual innovations and would have tended to preserve stability in the text-form copied by Greek scribes.
Posted by Nazaroo at 12:26 PM No comments: