The basic situation regarding surviving manuscripts can be easily charted. The first observation is that even with the discovery at the turn of the 19th/20th centuries of thousands of papyri, many of them NT, we still have only a few fragments that can be dated prior to about 200 A.D.

All the actual books and letters were written about 50 to 100 years prior to the earliest surviving fragments.

Although the relative dates of various gospels etc. can be moved around a little, the basic picture remains as at the left.

Although physical copies don't survive, some works were quoted by near-contemporary writers such as Clement and Polycarp, who lived before our earliest surviving papyri fragments are dated.


Three types of copies exist: (1) Papyri, (2) Uncials, (3) Miniscules. The first were copied on a crude 'paper' made of papyrus from the Nile and nearby regions (North Africa). The second and third types were written on parchment or vellum, animal hides, and were more durable.

The difference between (2) and (3) is more to do with the style of the writing: Uncials are written in a kind of 'Capital Letters, Miniscules are written in a 'cursive' or connected writing similar to modern handwriting. This came into fashion later, and gradually took over as a popular format.

The time span for each type of copy can be charted too. The use of each type of manuscript actually overlaps for long periods, as one style faded out and another took over. Also, certain types (like papyri) had a smaller geographical area of dominance, and so the different types come from different regions. Papyrus was favored in Egypt, while parchment and vellum was favored in the Eastern part of the Empire (Greece and Palestine).

(Click to Enlarge)
However, surviving groups of these types of manuscripts are not at all direct descendants of each other. Even though for instance, the Uncials were probably copied from earlier papyri, they were not copied from lines of transmission represented by surviving papyri, but rather others now lost. Similarly, the majority of miniscule manuscripts are not descended from surviving Uncial copies, but from others with a completely different text.

Hort oversimplified the real situation by claiming that the miniscule manuscripts were secondary, and that their text (the Byzantine text-type) was created by conflation and mixture of earlier Alexandrian and Western texts (represented by the Uncials):

So Hort makes the different types of manuscripts direct descendants of one another: 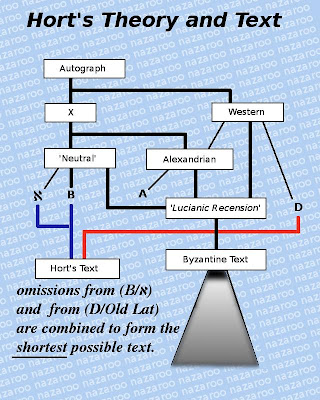 But the real story is more complicated and rich, and requires a closer look:

Neither the surviving Uncials, nor the Byzantine Miniscules (cursives) are direct descendants of one another at all:

In fact, the picture is even more complex, because of the developing Lectionary Tradition which grew up alongside the 'continuous-text' manuscript stream. These two mutually influenced one another at times, and caused mixture and cross-correction or 'bleeding'.

Many of the unusual readings in the early surviving Uncials and papyri can be traced to influence from this early Lectionary tradition, which evolved over time as church practices became more sophisticated and standardized.

Unfortunately, current Textual Critical theory and practice does not adequately account for this strong influence and cross-contamination between the two main textual streams.

Instead, modern textual critics treat the continuous-text stream as if it was isolated and independant of the Lectionary stream:

The possible contamination of the early papyri and Uncials by the Lectionary stream is typically ignored, even though it was probably the most intimate and extensive single influence upon the transmission stream of the continuous-text copies, since they were both manufactured in the same scriptoriums by the same ecclesiastical authorities.

Even the Alexandrian genealogical stemma itself is distorted by the Hortians. They try to suggest for instance that P75 is a more or less direct ancestor of Codex Vaticanus (and Aleph), to lend the Vaticanus text more authority and weight. But even though the text is certainly older than the 4th century, the lineage of Aleph/B is not as close as advocates of this theory contend. The real genealogical relationship is more like the following:

..and the surviving manuscripts are not really directly related at all, contrary to claims. Critics actually misrepresent the similarity between the papyri and Aleph/B. They speak of "90% agreement" etc., but have actually fudged the data to make the texts appear more similar than they are.

Click on the following link for documentation of the cheating: