The 'Catastrophe' Model
Now that we have the only viable genealogical stemma for a "catastrophe", it still isn't enough:  All the stemma does is provide an opportunity for a disaster to take place. 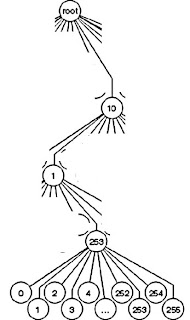 Its not a disaster by itself.  For we have presumed ordinary copying at every step.  Some copyists will make more mistakes than others, and some copies will be better proof-read than others.  But these variations do not create any kind of catastrophe.   The text will accumulate normal errors generation by generation, and the errors will be mostly among minority readings in the early copies.

In fact, if the copyists have done an honest job, the final copy will be as good or better than any other late copy we might have chosen as a master-copy for future copies.

It won't be until the final 'flowering' and rapid expansion of the last copy that we'll have the particular errors of this copy-line become a permanent feature of our 'majority text'.

But that's no real problem at all.  When we examine the text recreated from this final exemplar, it will only be slightly different in flavor from a text based on some other copy, or even a large group of other copies.  The overall error count will not be significantly higher from a practical point of view.

Planning a Disaster
For our disaster we still need one more thing: A  massive alteration of the text all at one sitting is needed as it were, so that the new false readings become majority-readings.  The most likely scenario will have this happening all at one time, since it is a rare and unusual event.

Since errors can only be injected in packets, the opportunity for a real disaster only occurs once per generation in this 'catastrophe' model.   In the example above, there are only three chances: Copy #10 (1st gen), copy #1 (2nd gen), and copy #253 (3rd gen).   Once mass-copying begins, the opportunity is gone.

This is exactly what the modern critics who follow Hort and the text of Aleph/B propose.  Hort claimed,

Hort tentatively suggested Lucian (c 300 A.D.) as the leader and some scholars subsequently became dogmatic about it.
Thiessen claimed:

All that we really know of Lucian was provided by Eusebius (c. 310 A.D.), and Jerome (c. 380 A.D.).  But the picture painted by this evidence is quite different from that proposed by modern critics.   Eusebius praises Lucian as virtuous, and Jerome later calls him talented; but James Snapp Jr. explains:


"...in his Preface to the Gospels, Jerome had described the manuscripts which are associated with the names of Lucian and Hesychius without any sign of admiration. Specifically, Jerome had written:

"It is obvious that these writers [Lucian and Hesychius] could not emend anything in the OT after the labors of the Seventy [i.e., they could not improve upon the LXX]; and it was useless to correct the NT, for versions of Scripture already exist in the languages of many nations which show that their additions are false."

Jerome suggests at least three popular 'revisions', each however being a regional text favored at its own major city-center.  Again James notes:


"Notice the setting of Jerome's comments. Jerome was, in 383, making a case for the superiority of the text-base which he has used as the basis of his revision of the Gospels. He had, he explained, supplemented [and corrected] the wildly-varying Latin copies by appealing to ancient Greek MSS, and he noted that he did not rely on MSS associated with Lucian and Hesychius. This implies that there were, at the time Jerome wrote, copies of the Gospels which were associated with Lucians name.

Jerome does not here deny consulting Origen's copies of the NT.  But it is known he went to Constantinople to use the oldest and best Greek copies there.  He has here specifically stated that he avoided using Lucian or Hesychius prefering older copies.


In Jerome's Introduction to Chronicles, he mentioned three popular forms of the Greek OT text:

"Alexandria and Egypt in their  LXX [copies] praise Hesychius as author; Constantinople to Antioch approves the copies of Lucian the martyr; the middle provinces between them read the Palestinian books edited by Origen, which Eusebius and Pamphilus published."

Also, addressing variants in Psalms, Jerome stated in his Epistle to Sunnias and Fretela (c. 403),

"You must know that there is one edition which Origen and Eusebius and all the Greek commentators call koine, that is common and widespread, and is by most people now called Lucianic; and there is another text, that of the LXX, which is found in the MSS of [Origen's] Hexapla, and has been faithfully translated by us into Latin."

Here Jerome clearly indicates that for the OT, he has avoided the Koine/Lucianic text, and used the text-critical work of Origen instead.

(1) There was no wholesale destruction of MSS or competing texts.  At the time of Jerome's Vulgate (400), at least three major text-types were readily available, each being used and copied over wide regions and distributed from independent centers.  Additionally, Jerome was able to travel to centers like Constantinople to access even older copies, predating the 'recensions' known to him around 400 A.D.   Those manuscripts would have been older than Origen's copies (c. 250), Lucian's (c. 300), or Hesychius (c. 250-300).

(2)  Official Recensions were not readily accepted, and did not displace current texts.   Jerome's Latin Vulgate (a new translation of the Greek into Latin), meant to replace the Old Latin copies which were too varied, was strongly opposed regarding his attempt to conform the OT with the Hebrew text.  It was finally adopted after many readings Jerome had introduced had been restored back to the traditional text!

(4)  The NT Takeover by the Lucianic Recension simply did not take place.  The association of the Lucianic text with the 'Koine' is in reference to the Old Testament versus Origen's version of the LXX.

(5)  The conditions for a 'Catastrophe' of the type proposed by Textual Critics did not exist, and no such drastic alteration to the text could have happened.  The Byzantine text is probably the result rather of a 'normal' transmission process.