Real life mimics real life. Thats what scientists continually discover. No scientific discipline can afford to isolate itself from its cognate fields.

Textual Criticism, in adopting the concepts and methods of genealogy, must also turn to other related fields to instruct itself, improve itself, and most importantly, maintain a balanced and humble view of its own current state of progress.

Turning to the field of the evolutionary genetics of man is immensely instructive for textual criticism. Here we find uncannily similar theories and ideas regarding geneaology undergoing rapid change. It does not matter for our purposes whether we believe in the complete 'evolutionary model' of early man, or the reconstructed history attached. The rock-bottom data, genetic relationships themselves, are real enough, and tell us how closely related two people may be, or two nations. This is quite similar to the case of text-types in NT Textual criticism. Observe the following remarkable alternative models for genealogical trees describing the descent of mankind:
(for original article go here: Discover Magazine Article)

The first model, the "Candelabra" model, was the early model conjectured by geneticists regarding Mankind. It was simple and logical, and convenient, but unfortunately, it contradicted the detailed evidence that began to surface in the actual genetic data. The problem was, all current populations show extensive mixture of genetic material, and not the expected isolation and distinction that the simple 'bushy tree' (Candelabra) would demand. 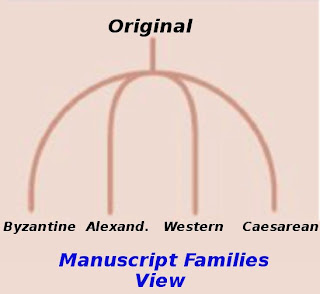 This corresponds to the early and naive 'textual families' model suggested by Selmer, Bengel, and modified by the concept of "Recensions" by Hug, Griesbach, etc. in our field of Textual Criticism. In this field too, the model was too simple to account for the detailed data found in collating the actual manuscripts.

Next naturally came the 'MultiRegional Model', in which all the data was explained as continual or repeated cross-pollination or mixture all along the time-line. For a long time this model held attraction for its apparent ability to account for the data. 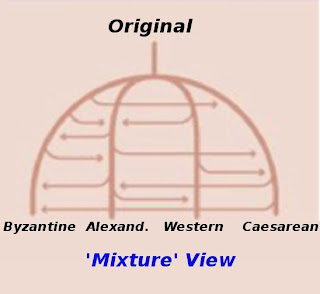 Similarly, in NT Textual Criticism, this idea was adopted to explain the mixture in every actual manuscript. No lines were 'purely genealogical', but all contained 'mixture' and cross-pollination. Reconstruction of historical dependence had to be painstakingly solved variant by variant, manuscript by manuscript.

When it became apparent that the previous model was not adequate to explain the homogeneity and conformity of genetic lines among diverse groups, a new model, the "Replacement Model" was developed. Here the reason for conformity was explained as 'natural selection' eliminating less successful lines and lucky survivors becoming dominant. This was the status quo theory up until 2009 in Evolutionary propaganda (i.e., the public position). 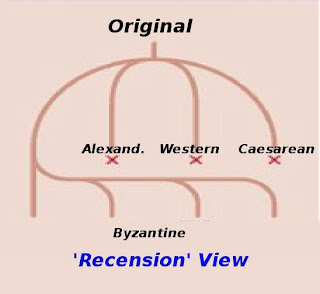 Naturally NT Textual Criticism unconsciously followed the same pattern; in its finalized form, Westcott/Hort proposed that ALL later manuscripts were descended from a single, secondary line, fabricated by editing, mixture and conflation of earlier text-types. The uniformity of the Byzantine text was thus accounted for in a hypothetical "recension-process" which won a Darwinian competition but which was declared a bad candidate for the original text. With very little modificaton (see our previous Westcott/Hort stemma) the above Replacement Model gives the new look of the NT TC reconstruction. 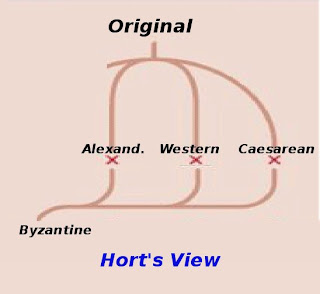 It is interesting that Mr. James Snapp Jr.'s excellent diagrams, while elegant in their artistry, are almost identical topologically to the Replacement Model above: See for instance his pictoral representations here: James Snapp on Textual Transmission 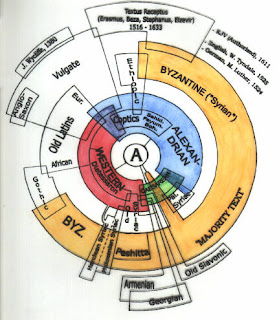 "Here is the full Textual Araneum (Web-structure), which I present to give some idea of how the influence of the various text-types spread, and how they have affected both English and non- English translations. This arrangement shows the "genealogy" of the various branches of the manuscript evidence."

(4) The Assimilation Theory (readings from origins leak through)

Now further analysis has required that even the Replacement Model must be abandoned in favor of another modification, in which connections are re-established with early roots, to explain how significant quantities of the earliest genetic material could have survived in such a small and impoverished sample with such a narrow basis. 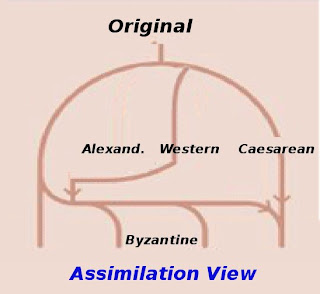 In the same way, textual critics have grudgingly acknowledged that the Byzantine text does indeed have many very early readings (2nd cent.), and that these must probably go back to the original copies. The problem is that current critical texts don't reflect the last 50 or even 100 years of advance in insight, but still just repackage the Westcott/Hort text, which is crap. What needs to be done is to acknowledge that the Byzantine text-type is one of the most powerful and valuable sources of early readings for the NT, and it needs to be re-enthroned on a newer, more stable platform based on current knowledge of the text.

Geneticists cannot even at this late stage be at all certain of actual genealogical relationships and a developmental history, even with their vast array of scientific instruments, techniques and technological and theoretical brilliance, and even while relying on the cold hard evidence of genetic data.

How can textual critics have the gall to claim any confidence in the certainty of their own reconstructions? These by nature must be equivalent to crude crayon drawings, and vague romantic notions, next to the big boys of science.