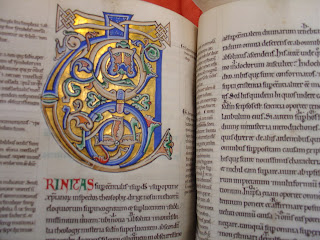 By the late 1890s, many important and outspoken opponents of the Lachmann/Hort approach had articulated and published their criticisms.  This did not derail the tampering of the NT text, but split textual critics and interested Christians of all denominations into two groups:


(1) Those who went with the new 'scientific' theories, preferring the critical texts, and
(2) those who were unconvinced, and held to the Traditional Text.

At this juncture, apologists like Marvin Vincent attempted to review the history of textual criticism itself, and distill out advances in knowledge and scientific progress.  In his book, A History of the Textual Criticism of the New Testament (Macmillan, 1903), Vincent advances what he considers to be the development of TC and current state of affairs.  He sums up the First Period of recent Textual Criticism as follows (p. 93-95):

A review of the First Period (1516-1770) exhibits, in the beginning, a scarcity of documentary sources, an arbitrary determination of the text on a false and narrow basis, and a general ignorance of the comparative value of  documents. The small number of manuscripts accessible (1) or used was only one of the obstacles which opposed the purification of the text.  (2)  Scholars were  unable to make the best choice from among those actually at hand, or were not accurate in comparing them, or estimated the value of readings according to their number. (3)

"In consequence of the astonishing number of copies which appeared at the very beginning, (4)  in a long series of manual editions, mostly from one and the same recension, the idea grew up spontaneously very early that in the manuscripts also the text was tolerably uniform, and that any thorough revision of it was unnecessary and impertinent. The Oriental Versions were closed to most; the importance of the Church Fathers was scarcely suspected; but the greatest lack of all for the purification of the text (2)  was the indispensable knowledge of the process of its corruption" (5)  (Reuss).

Moreover, the beginning of the seventeenth century was marked by the rise of the Purist controversy. The Purists maintained that to deny that God gave the NT in anything but pure classical Greek was to imperil the doctrine of inspiration. The Wittemberg Faculty, in 1638, decreed that to speak of barbarisms or solecisms in the NT was blasphemy against the Holy Ghost. Hence, a correct conception of the peculiar idiom of the Apostles was impossible, and the estimate of different readings was seriously affected by this cause.  (6)

Readings of existing editions were arbitrarily mingled, the manuscripts employed and the sources of variants adopted were not properly specified, and a full survey of the apparatus was impossible. (7)

The number of uncial sources [MSS], (1)  however, gradually increased; the existence of various readings was recognized, but they were merely registered, and not applied to the construction of a purer text. (2)  There began to be signs of revolt against the authority of the Textus Receptus, and [also] attempts to restore the text (2) on the evidence of manuscript readings. (8)

There arose a growing distrust of the numerical basis of evidence.  Manuscripts began to be weighed instead of counted. (9)  There was a dawning recognition of the value of ancient documents and a corresponding effort to formulate principles of classification. A large mass of material relating to MSS, Fathers and Versions was collected, which awaited thorough sifting  and arrangement, and the doctrine of families of texts was broached. Through all this the Received Text substantially maintained its supremacy, (10) though its pretensions were boldly challenged by individual critics; its chain (2)  was rudely shaken and more than once broken, and its authority began to be visibly weakened. (11)
...
The superstitious hesitancy (2) about departing from the Received Text still prevailed, and the critical valuation of the older uncials was suffering seriously from Wetstein's sweeping charge of latinisation (1751).' (12)  (Vincent, p.93-95)

Those already inclined in the Lachmann-to-Hort direction might find Vincent's banter satisfactory, as he attempts to build a platform to support the W/H critical text.  But others who differ from this view will note some serious flaws and distortions in the presentation, exposing Vincent's bias.

(1)  Vincent claims the period begins with only a 'small number of MSS', but this is patently untrue.  Even Erasmus (1516), who made use of only a handful for his first edition, had already collated dozens of MSS in England and Europe for his fresh Latin translation.    Early editors quickly gained access to dozens more independent copies, and Vincent seems oblivious to the contradiction here brought in by his own quotation of Reuss [!]:  "the astonishing number of copies which appeared at the very beginning," ...

(2)  Vincent begins liberally using suggestive language ("purification of the text" etc.) that begs the question regarding the relative purity and value of the TR in comparison to subsequently reconstructed 'critical texts' cobbled together from Uncial readings.  It has yet to be established that the TR is "impure" in any significant way, even if one or two readings are legitimately open to challenge, such as 1st John 5:7 etc.  The suggestion of course is that the Traditional Text (TR) is in desperate need of 'restoration', but convincing case has yet been made.

(3)  Of course scholars indeed rightly 'estimated the value of readings according to their number', since this is a legitimate indicator of the spread and antiquity of a reading.   It was never the only criterion, as review of the period literature (Mill, Bengel, Wetstein, Michaelis) shows.  Vincent implies that this was an incorrect methodology, or that it was naively applied and led to bad results, but this has never been shown.  Indeed, the very same criterion is applied enthusiastically without qualification to passages like 1st John 5:7 etc. by the same critics who avoid the criterion in other cases.  This inconsistency is far more glaring in the W/H position (with its rejection of countless majority readings) than in the TR position, which with few exceptions values this criterion.  In no case can estimating readings by MS count be found as the sole or main methodology anywhere in the literature of the period, or subsequently up until the 1880s.  Even Burgon and Miller did not articulate or elevate such a criterion to preference over all other considerations.

(4)  Here 'the astonishing number of copies' (Reuss) refers in the main to later cursive (minuscule) copies, ranging from the 8th century to the 15th.  It appears that Vincent's contradiction can be traced to the fact that he only considers Uncial MSS to be of any value for textual reconstruction.

(5)  It is true that 'knowledge of the process of corruption' is indispensable.  The majority of variants are in fact accidental errors, or minor linguistic updates.  However, understanding this process better in the 20th century has resulted in the reversal of TC canons taken for granted in the 17th to 19th centuries, such as "Prefer the Shorter Reading" (Griesbach, 1805).  But such knowledge remained virtually unknown in Vincent's day, or else was wilfully ignored (e.g., Westcott/Hort).

(6) The Purists did not influence 17th century textual criticism, at least as significantly as claimed here.  Very few important variants turn on questions of classical vs. Koine grammar, or new knowledge from a study of the papyri.  This controversy had more relevance to translational issues and  interpretation.   Few textual critics can be shown to have made errors in judgment because of a lack of knowledge of 1st century Greek.  The concern is unsubstantiated.

(7)  Access to the basic apparatus was hardly 'impossible'.  Between John Mill, Bengel, and Wetstein, one had a very clear picture of what had been collated by the end of the 17th century, and also access to quite thorough discussions of most important variants.   Michaelis considered Mill and Wetstein indispensable, but certainly adequate for purposes of research.  Even after many more MSS were collated, as accomplished later by Griesbach and Scholz, most experts acknowledged that the textual situation had not greatly been altered.  It was more of the same.

(8)  Here Vincent implies that all the texts so far published (Erasmus, Mill, Wetstein, Griesbach) were somehow not constructed on the basis of MSS evidence.  But this is ridiculous.   Every textual critic was concerned with the same question, and used the same approach: MSS readings.

(9)  No distrust of the weight of numerical evidence for this period can really be shown.  What instead appears is rather a lack of a solid grasp of the value of any criterion or aspect which could be used to evaluate readings.  Textual critics of the period were making guesstimates, and trying to construct a methodology.  They confronted a complex situation, but had no solid grounds or technique for weighing conflicting evidences.

(10)  As Vincent here confesses, most critics understood well the preliminary stage they were in, and exercised due caution as to any alterations in the traditional text at hand.   He calls this reasonable caution a 'superstitious hesitancy', but this is an anachronistic back-projection, due to his impatience with earlier scholarship.

(11)  The essential text, the 'Received Text' continued to 'prevail', well into the 1870s, almost a hundred years beyond Vincent's suggestion as to when it was 'visibly weakened'.  The subsequent critical texts of Griesbach and Scholz continued well into the 19th century, and are essentially the same as the TR.  What is visibly weakened, is Vincent's credibility as a historian, due to his bias in favor of the W/H type text.

(12)  Wetstein did make some strong statements against using the early Uncials, which he had observed were alarmingly at variance with both the Traditional Text, and each other.  He also was highly suspicious of key Uncial readings which conformed to the Latin Vulgate.  But the prevalent opinion (cf. Michaelis and others), was that here Wetstein was acting in an overly paranoid fashion toward both the Latin text(s) and Uncials sourced from Roman Catholics.  It seems clear that Wetstein's views here actually had in fact very little influence upon other textual critics of the period.  Like the opinions of the "Purists" 100 years earlier, Wetstein was hardly able to affect the progress of TC.   Such claims appear to be  ad hoc  but inadequate explanations for why most textual critics up until 1830 (Lachmann) strongly disagree with the results of modern TC.